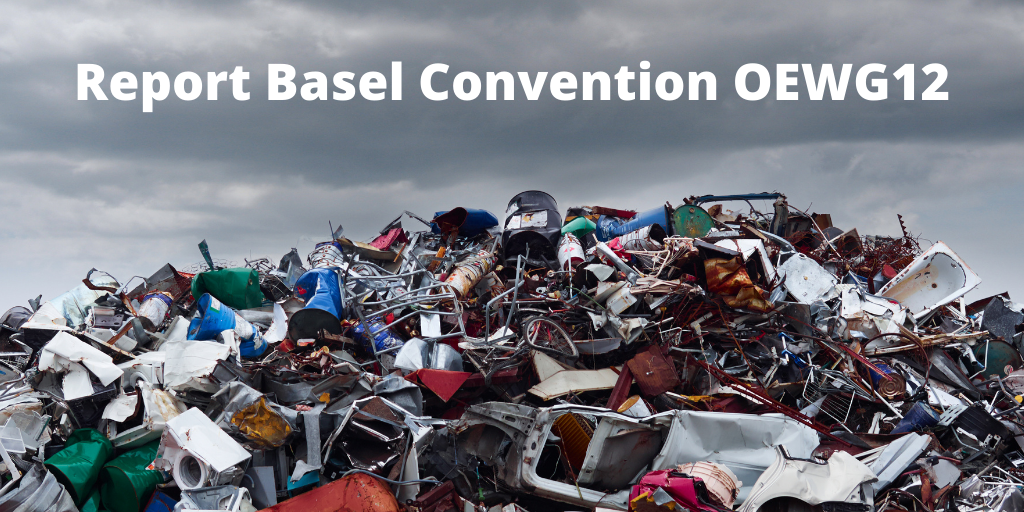 The HEJSupport co-directors Olga Speranskaya and Alexandra Caterbow participated in the twelfth meeting of the Open-ended Working Group (OEWG-12) of the Basel Convention on the Control of Transboundary Movements of Hazardous Wastes and their Disposal that ended on September 3, 2020. The three-day meeting was held online. It is expected that the second part of the OEWG meeting will be held in a regular face-to-face format in March 2021 in Nairobi, Kenya, in conjunction with the meeting of the UN Environment Assembly (UNEA-5).

The decision to hold a virtual meeting of OEWG-12 was taken due to the need to discuss ways to minimize and manage hazardous and other wastes falling under the Basel Convention. The amount of hazardous waste entering the environment is likely to increase due to the global COVID19 pandemic, and with an estimated 1000 million tons of plastic waste entering landfills or the environment by 2050.

Representatives of 120 countries took part in the virtual meeting of the OEWG-12. A total of more than 600 people attended the meeting, including representatives of country Parties and observers. Various technical, policy and legal documents were briefly reviewed, including draft reports, guidelines, technical guidelines, and recommendations. Final versions of these documents will be considered at the face-to-face segment of the OEWG -12 and at the fifteenth meeting of the Conference of the Parties to the Basel Convention, scheduled to be held in Geneva in July 2021.

Parties and stakeholders stressed various points during the meeting:

Speaking specifically about plastic waste, Rolph Payet, Executive Secretary of the Basel Convention, stressed the importance of the efforts made by countries that address the problem of plastic waste, for example, through the adoption of appropriate laws. He noted the need to support countries in these initiatives and called on producers, traders and consumers to reduce the production and use of disposable plastic, to introduce plastic into appropriate recycling systems and not to throw plastic waste into the environment.

Mr. Payet also noted that the formation of plastic waste increased during the COVID-19 pandemic, but it becomes obvious that the increase in production and use of disposable plastic is not the way to solve the problem. Waste dumping in developing countries must be avoided.

A representative of Ghana, speaking on behalf of the African region, stressed that the world is facing new challenges such as marine debris and microplastics. Addressing them required an innovative approach and active collaborative efforts.

The representative of Latin American countries stressed the importance of the entry into force in December 2019 of the Basel BAN amendment (see http://www.basel.int/TheConvention/Overview/TextoftheConvention/tabid/1275/Default.aspx ), which prohibits the movement of hazardous waste from developed to developing countries. He also noted the entry into force of amendments on plastic waste to the Annexes of the Basel Convention, which will enter into force on January 1, 2021, and called on countries to implement them effectively. In addition, he noted that marine pollution from plastic waste has a negative impact on biodiversity, fisheries, tourism, etc. Participation of countries in the Partnership on Plastic Waste established under the Basel Convention is of great importance. The speaker also mentioned the need for environmentally sound management of marine waste and the importance of obtaining necessary funding to prevent and reduce the generation of plastic waste that pollutes the marine environment.

Among the various technical guidelines presented at the OEWG-12 virtual meeting were technical guidelines for the identification and environmentally sound management of plastic waste and its disposal. The representatives of Norway noted that although these guidelines have improved significantly from the first draft of this document, more attention needs to be paid to the issue of waste prevention and to improving the quality of waste for further processing. In addition, the guidelines should assist countries in implementing Basel plastic amendments that enter into force on January 1, 2021.

Speaking on behalf of non-governmental organizations, the representative of the Global Alliance Against Incineration noted that the Basel Convention has a crucial role to play in combating the plastic pollution crisis and that these updated guidelines could be an important contribution to solving the plastic crisis. NGOs support Norway’s remarks that more attention should be paid to waste prevention and improving the effectiveness of the guidelines. Other areas that NGOs believe should be strengthened include the following:

On technology: The guidelines should focus on best available technology and best environmental practices for plastic waste management, rather than speculating on possible changes in pyrolysis, gasification and forms of chemical recovery of plastic waste in the absence of reliable environmental and human health impact assessments.

As for the waste hierarchy, the boundaries between R3 recycling operations and R1 recovery should not be blurred. Mechanical recycling of plastics should be clearly separated from such forms of thermal recovery as pyrolysis and gasification, which result in formation of oil and gases used as fuel. The processing of plastics into fuels should by no means be considered as recirculation and vague formulations such as “chemical recirculation” or even “advanced recirculation” should be avoided. Such blurring of the waste hierarchy, and with it the environmental consequences of different waste management processes, undermines environmentally sound waste management and the recycle economy.

As to the role of these guidelines in ensuring adequate interpretation and compliance with the new amendments to the Basel Convention on Plastic Waste, unfortunately these guidelines do not recommend clear limitations on pollution in the transport of plastic waste, but instead refer to voluntary industry specifications. Voluntary measures have not been able to stem the global plastics waste and associated toxic pollution crisis, particularly in developing countries.

During the OEWG virtual meeting it was decided to ask the Parties to the Basel Convention and observers for comments on the documents discussed, which are available on the OEWG-12 website at http://www.basel.int/TheConvention/OpenendedWorkingGroup(OEWG)/Meetings/OEWG12/Overview/tabid/8264/Default.aspx .

The relevant documents intended for comments are also available on the Convention website under the section “Call for comments and follow-up to the online segment of the twelfth meeting of the Open-ended Working Group on the Basel Convention” at http://www.basel.int/?tabid=8530 .

In particular, comments can be provided on the draft practical guidelines for plastic waste inventories and background information on possible future assessment of the effectiveness of measures taken under the Basel Convention to address the problem of plastic waste and possible future activities that could be carried out under the Basel Convention.

The second day of the OEWG-12 was entirely devoted to side events. In particular, an NGO event entitled “Hidden dangers in plastic waste: the next challenge of the Basel Convention” was held.

Recent amendments adopted at the 14th Conference of the Parties to the Basel Convention (COP14) to annexes II, VIII and IX for some mixed and contaminated polymeric waste were an important step in preventing hazardous and irresponsible trade in plastic waste. However, COP14 did not identify the fact that most plastics, including those currently on the list of non-hazardous waste (Annex IX), are not only polymers but also contain numerous hazardous additives that must be qualified as hazardous waste (Annex VIII) or at least as Annex II wastes. In addition, some of the polymers currently listed in Annex IX, including hardened resins and fluorinated polymers, are hazardous in themselves and cannot be treated as non-hazardous wastes. This issue was not considered at COP 14 and should be resolved now. NGO experts reviewed these issues and presented a recent analysis of landfills in Indonesia to highlight the real danger posed by such plastics regularly exported to developing countries. Presentations and webinar recordings will be available at: http://www.basel.int/TheConvention/OpenendedWorkingGroup(OEWG)/Meetings/OEWG12/Sideevents/tabid/8425/Default.aspx .