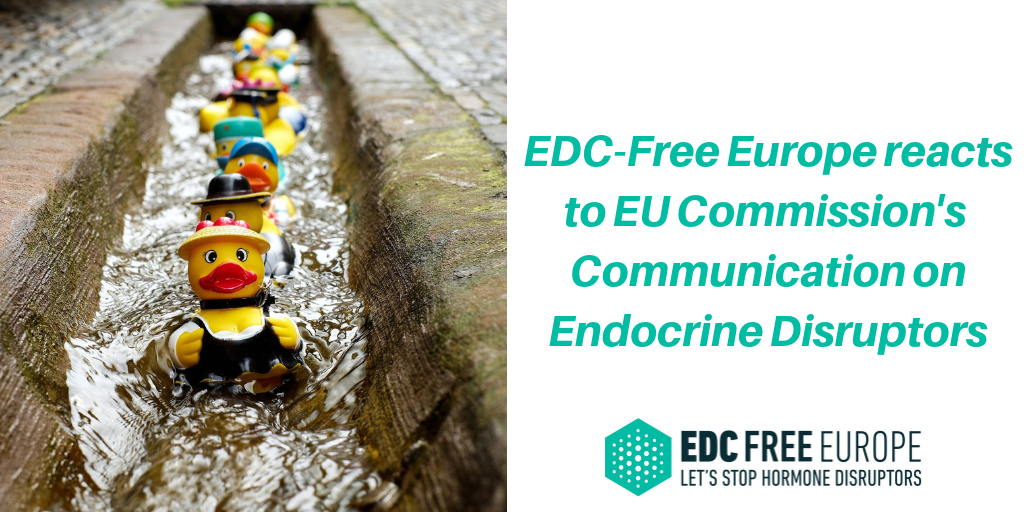 HEJSupport is happy to share this press release of the EDC-free Coalition. HEJSupport is a member of the advisory group of the coalition.

In a move that is long overdue, the EU Commission published today the EU Communication on endocrine disrupting chemicals (EDCs). However it lacks specific measures and timelines on how people and the environment can be better protected from these harmful chemicals [1].

We welcome that the Communication has the goal of minimizing exposures. Further positive aspects are the commitments for more international collaboration, research, and information on EDCs for citizens, including encouraging EU Member States to run awareness-raising campaigns. However, the Communication does not mention any steps for moving forward to truly minimise exposures.

The Communication fails to lay out proposals to control EDCs across all EU laws, in order to reduce the environment and people’s exposure. A key demand from the EDC-Free Europe campaign that is glaringly absent is “a concrete action plan aiming for a high level of protection for human health, especially vulnerable groups, and the environment” [2]. Any policy action is further delayed as the Commission has decided to limit its commitments to doing another Fitness Check, even though there is already a review of EU chemical legislations ongoing [3, 4]

A second example of missed opportunity is the absence of a specific plan to adapt EU laws in order to address the EDC cocktail effect to which we are exposed daily.

The EDC-Free Europe campaign, a coalition of more than 70 environmental, health, women’s and consumer groups, says the lack of ambition is particularly disappointing given the overwhelming number of national authorities, research offices and non-governmental organisations who echoed the need for a comprehensive and ambitious EU EDC Strategy during a public consultation this summer on what the strategy should contain [5].

“Our coalition has been urgently calling for an EDC strategy since its creation in 2013 to move forward on concrete measures to reduce people and wildlife’s exposure that go beyond pesticides and biocides”, says Génon K. Jensen, EDC-Free Europe spokesperson. “After nearly a decade of inaction, the European Commission has still failed to seize the opportunity to significantly improve the lives of millions of EU citizens and commit to closing obvious regulatory loopholes such as cosmetics, toys and food packaging or the toxic recycled EDCs that find their way into our bodies”.

The EDC-Free Europe campaign now calls on the European Parliament and Council to seize this opportunity to protect the environment and public health by requiring more ambitious and concrete EU and national action on EDCs, and to take on board the eight demands from the EDC-Free Europe [2].

[1] http://europa.eu/rapid/press-release_IP-18-6287_en.htm [2] The EDC-Free Europe campaign published its eight demands for a European EDC Strategy in May this year: http://www.edc-free-europe.org/articles/position-paper/eight-demands-edc-strategy.