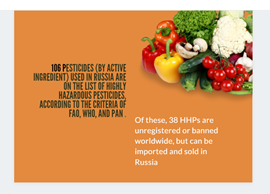 At the end of December 2020, the Federation Council of Russia approved the Law on Amendments to the Federal Law “On Safe Handling of Pesticides and Agrochemicals” in terms of improvement of state control (supervision) in the field of safe handling of pesticides and agrochemicals.

These exemptions allow uncontrolled use of pesticides, including highly hazardous pesticides (HHPs), on private farms and orchards, based solely on the information on the product label. This can lead to serious consequences for human health and the environment, including an increase in pesticide poisoning.

According to a 2019 study on the use of HHPs in Russia, there is an increasing trend in the use of chemical plant protection products in the country. The study highlights that the State Catalog of Pesticides and Agrochemicals permitted for use in the Russian Federation at the beginning of 2020, registered 652 units of preparative forms of pesticides (individual and mixed by active ingredient). This is significantly more than in previous years.

In addition, 106 pesticides (by active ingredient) used in Russia are on the list of highly hazardous pesticides, according to the criteria of the UN Food and Agriculture Organization (FAO), the World Health Organization (WHO) and the Pesticide Action Network (PAN). Of these, 38 HHPs are unregistered or banned worldwide, but can be imported and sold in Russia.

The leaders in pesticide imports to Russia are such European and American companies as Monsanto, Bayer (Bayer CropScience), Syngenta, Dow AgroSciences, DuPon and BASF. For example, the producing country of Sumithion, which active ingredient is the highly hazardous pesticide Phenithrotion, is Austria. This drug is banned in 27 EU countries and the UK, but is allowed in Russia.

The European Commission’s October 2020 Chemicals Strategy for Sustainability states that the EU will “in line with international commitments, ensure that hazardous chemicals banned in the European Union are not produced for export, including by amending relevant legislation if and as needed”. It is hoped that this decision will also affect the export of HHPs to Russia, despite the fact that many EU banned products are included in the catalog of permitted pesticides in Russia.

Implications of new amendments for illegal trade in pesticides in Russia

Lack of control over pesticide application for personal use opens the way to illegal trade in pesticides and agrochemicals and increases the risk of negative consequences to people’s health and environment. Risks associated with illegal pesticides include reintroduction of expired and seized counterfeit pesticides into the market; production, repackaging and distribution of counterfeit and banned pesticides. In reality, the use of pesticides should be equated with the use of narcotic drugs and other toxic chemicals.

Obviously, to counteract illegal trade in pesticides, Russia needs to strengthen control over the circulation of pesticides at all levels, including their application for personal use. It is necessary to conduct regular raids on markets and stores to identify and seize counterfeit products and prevent their reuse, and to conduct information campaigns among the general public about the dangers of pesticides.