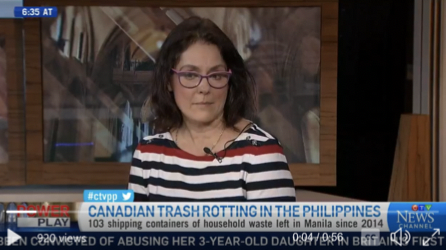 HEJSupport Co-Director, Olga Speranskaya, was interviewed by the Canadian TV Power Play to discuss the issue of Canadian waste rotting in the Philippines

The story behind the interview: The 103 shipping containers of mixed garbage from Canada, wrongly declared as scrap plastics for recycling, were exported and dumped in the Philippines five years ago. The waste actually contained household trash, used adult diapers, and electronic waste. Such illegal export violates the national legislation of the Philippines, which states that “no importation of heterogenous and unsorted plastic materials shall be allowed” and that “all plastics shall have no traces of toxic materials.” The shipments further violate the Basel Convention on the Control of Transboundary Movement of Hazardous Wastes and Their Disposal, which says that “the State of export shall ensure that the wastes in question are taken back by the exporter or the generator or, if necessary, by itself into the State of export.”

According to the waste analysis conducted by the officials in the Philippines , approximately 64 percent of the intercepted Canadian garbage shipments were “baled municipal solid waste or garbage destined for immediate local disposal and cannot be recycled.” In 2015, wastes from 26 of the 103 containers were illegally disposed of at a private landfill in Tarlac province angering officials and citizens.

HEJSupport co-signed a letter to support the appeal made by the EcoWaste Coalition and call on Justin Trudeau to take the following actions they have requested: