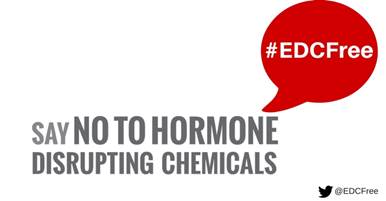 NGOs acknowledge vote on first ever EDC criteria – call on European Parliament to reject flawed criteria for the sake of human health and environment protection.

Brussels, 4 July 2017 – Today, representatives of European member states from the EU pesticides committee adopted the criteria that are supposed to be used to identify endocrine disrupting chemicals (or EDCs) in the future.

The EDC-Free coalition regrets the insufficiency of the criteria adopted today, which will not guarantee the level of protection for human health and the environment that is urgently needed (1) and that scientists and citizens are calling for from across the EU. Ahead of the vote, three highly respected international scientific societies of endocrinology raised the alarm bell about the shortcomings of the proposed criteria, urging member states not to approve them in their current state. (2) Meanwhile, over 458,000 people all across Europe signed a petition calling on member states to reject the EU Commission’s proposal. (3)

The main concerns of the EDC-Free coalition are as follows:
• The criteria require a very high burden of proof, which makes the identification of substances as EDCs very difficult and is likely to result in long delays.
• The proposed exemption from identification for certain pesticides and biocides that are designed to be endocrine disrupting would strongly undermine the objective of the EU pesticides and biocides law to phase out the use of EDCs.
• The criteria contradict the EU commitment to horizontal EDC criteria and minimisation of EDC exposures as decided in the 7th Environmental Action Programme. (4)

“Strong EDC criteria would allow Europe to lead the world by example and to initiate urgently needed measures to reduce our unnecessary exposure to toxic substances. The criteria voted today contain a flawed loophole and require such a high level of proof that they will not protect people or wildlife. We call on the European Parliament to reject these criteria” says Genon K. Jensen, EDC-Free Europe spokesperson.
While Sweden and Denmark defended an ambitious approach to protect human health and the environment until the final vote, the EDC-Free Europe coalition regrets the last-minute change of position of France, which is in total contradiction to the electoral promises of Emmanuel Macron and promises made in the run up to the vote. The overall lack of foresight/vision of EU member states will result in significant costs for public health and society. A conservative estimate found that the current burden on public health budgets from the diseases arising from exposure to EDCs in the European Union is estimated is at least 163 billion Euro per year. (5)

Notes to the editor
1. http://www.edc-free-europe.org/european-commission-is-unable-to-turn-the-page-on-endocrine-disruptors-edcs/
2. See http://bit.ly/2t914p5. This adds to concerns expressed earlier not only by endocrine societies, but also by health mutual groups. See for instance: https://www.endocrine.org/news-room/current-press-releases/european-commissions-revised-proposal-limits-ability-to-protect-public-from-edcs ; http://aim-mutual.org/press-release/aim-publishes-declaration-on-edcs/
3. https://actions.sumofus.org/a/eu-endocrine-disruptors
4. http://www.documents.clientearth.org/wp-content/uploads/library/2017-02-14-the-criteria-to-identify-endocrine-disruptors-implications-beyond-pesticides-and-biocide-disrupted-criteria-coll-en.pdf
5. Burden of Disease and Costs of Exposure to Endocrine-Disrupting Chemicals in the European Union: an updated analysis, https://www.ncbi.nlm.nih.gov/pubmed/27003928