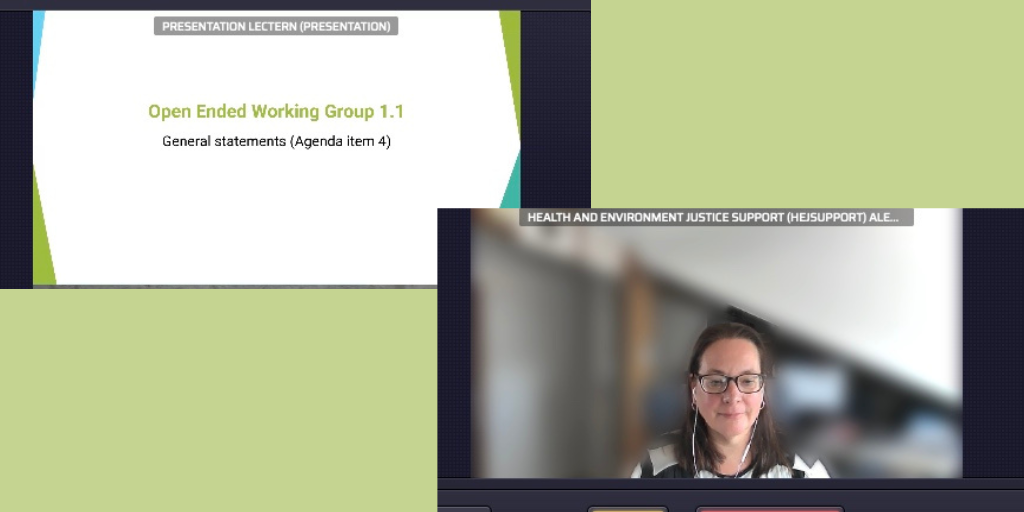 A new Science Policy Panel for chemicals and waste

At the UNEA5, member states decided in resolution 5/8 to start a process to establish a Science Policy Panel (SPP) for chemicals and waste.

To implement the resolution, the first hybrid meeting of the Open Ended Working Group (OEWG) took place on the 8th of October in Nairobi. HEJSupport participated in the meeting and made an intervention on behalf of the Women Major Group.

For more information about the meeting, visit the ENB website.

Statement on behalf of the Women Major Group

I am Alexandra Caterbow from HEJSupport, speaking on behalf of the Women’s Major Group. We would like to thank the government of Kenya and UNEP for hosting this meeting.

We believe the science-policy panel can be an important tool. However, it should not be misused to prevent political action. Governments should already adopt measures to prevent exposure to hazardous substances on the basis of the best available scientific evidence, as required by the right to science. Yet, scientific warnings have often been followed by inaction.

For instance, scientists discovered the hormone-related effects of BPA at the beginning of the XX century. Now, almost 100 years later, countries still allow the production and use of this substance of very high concern in everyday products, from food containers to plastic bottles. Industry lobby groups continue to promote it. Nearly 100 scientific studies have been published, linking BPA to health problems almost a decade ago. These lifelong impacts on health could have been prevented if political action followed early scientific warnings.

Finally, the science-policy panel should not be undermined by economic, commercial or political interests. This is why it will be crucial to avoid conflict of interest from the early stage of negotiations, protecting the panel from businesses and groups with commercial, economic and political interests or any others who put profits above human rights. Failure to do so will perpetuate toxic harm, undermine science, and the credibility of the new panel.

We expect transparency and full and effective inclusion and participation in all decision-making processes, including the full inclusion of indigenous and local knowledge. Gender equality and mainstreaming in all processes is a must. Actions and decisions to be taken should be gender-sensitive. Women scientists, citizens, and civil society members remain ready to continue working together for effective science-policy action.